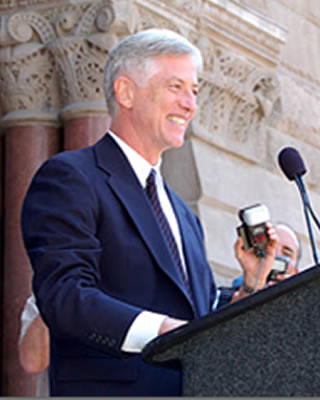 Ross C. “Rocky” Anderson of Salt Lake City, Utah, is one of five candidates for the Peace and Freedom Party Presidential nomination. He is the nominee of the Justice Party. His campaign website is www.voterocky.org.

Each candidate for President is entitled to submit a statement of up to 250 words to the Secretary of State, who publishes them on her website. This is Rocky Anderson’s statement (click here for the original).

I’m running for President because I believe government should promote freedom, equal opportunity, compassion, and security for all. Presently, the two dominant parties and their candidates owe primary allegiance to wealthy and corporate donors. Unlimited money has corrupted American politics.

As the two-term mayor of Salt Lake City, Utah, I became internationally recognized as an effective advocate for the rights and freedoms of individuals, sound environmental policy to stop global warming and spur the economy, and my opposition to the Iraq War and other illegal and immoral projections of US military power. Under my leadership, Salt Lake City’s operations became some of the “greenest” in the nation while I fought relentlessly for environmental, economic, health and civil justice for all.

As president, I will work toward universal health care for all Americans, as exists in all other industrialized nations. I will implement cost-effective drug policies that treat addiction as disease rather than a crime. My proven record as a fiscal conservative demonstrates my resolve to balance the budget and reduce the accumulated debt by eliminating unnecessary spending and implementing fair taxation of those who gain most from our system. I will bring the Federal Reserve under control and eliminate the collusion among Wall Street, lobbyists, and government and work to reverse the disastrous Citizens United decision. The two-party duopoly has allowed corporate ownership of Washington. Only someone outside that system can change it. I have the proven record, vision, and energy to make that happen.

I practiced law for 21 years in the areas of antitrust, securities fraud, professional negligence, and civil rights litigation. I served two terms as the Mayor of Salt Lake City from 2000-2008. I was the founder and served as Executive Director of High Road for Human Rights from 2008-2011.