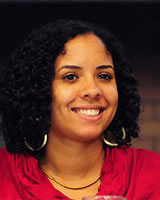 Peta Lindsay of Los Angeles, California is one of five candidates for the Peace and Freedom Party Presidential nomination. She is the nominee of the Party For Socialism and Liberation. Her campaign website is here.

The Secretary of State refuses to put Lindsay’s name on the Peace and Freedom Party primary ballot. We joined her and her supporters in an unsuccessful (so far) lawsuit to get her on the ballot. But she will be a candidate at the State Convention, which is not bound by the results of the preference primary.